During a cold run in December a few years ago on the American Tobacco Trail, a glint of color and shine ahead distracted me from my thoughts. Once I approached it, I came to a complete halt, which I now imagine happens to most who see it for the first time, among what is otherwise a long stretch of pine straw and trees. Just off the trail, beautiful bulbs and ornaments were hanging on an evergreen tree, set against the backdrop of bare branches and fallen leaves. Another year, I had the pleasure of seeing this ATT Christmas tree glittered with snow, on a day we were lucky enough to have snow fall on an early North Carolina winter day. This tree always left me with questions, as each year its branches grew heavier with new decorations. My questions were finally answered when one day, I was running on the trail with my good friend Lori Stevens, who knew the tale of this special tree, and told me the story of how this tradition came to be.

Lori had known Keith Boswell for twenty years, but didn’t know that he was the person behind this tree, until its second or third year on the trail.  Keith is the father of two college kids, a runner, and triathlete living in Cary, NC, with his wife Tammy. Several years ago, he saw the tree, decorated with red bows, while training for his first full marathon. It brought him joy on a particularly challenging twenty mile run, in which he had been feeling a bit depressed about the distance and weather. The next year, he looked for it again, but it remained undecorated. On the third year, Keith turned his disappointment of seeing the empty tree into action: In 2013, he and a couple friends carried ornaments on their trail visit, and the ATT Christmas tree tradition was born.

When Lori realized it was her friend Keith and his friends who were decorating the tree, she decided to hang peppermint Gu packets on the tree for runners to pick up along the trail (and was happy to see them gone the following week). Over the years, anonymous runners have left thank you notes or added more ornaments, of which there are now there are well over one hundred. Other items have occasionally been added to the tree, such as mittens, to warm the fingertips of cold runners and walkers if they find themselves in need. 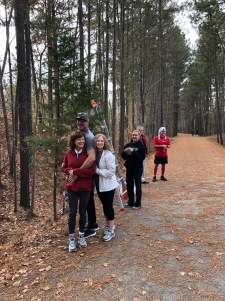 Each year since, this group of friends has grown and 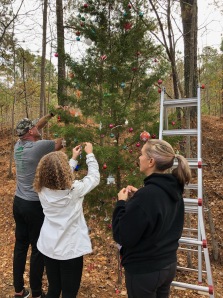 become something of a party. A date is now set to make sure everyone can come. Another friend, Richard Johns, now drives a ladder to the spot so the tallest branches can be reached. Later in the season, the group returns to the tree with cocktails and holiday breakfast treats. Once the holiday season is over, they return to carefully pack and store the ornaments for the next year.

During these last few years, I have planned countless December runs at the ATT, because I knew the lure of this tree would help pull me out of bed on frigid mornings. If the tree calls to you too, you can find it between the Wimberly and the White Oak entrances on the ATT, during the holiday season. Many thanks to Keith and his dear friends, for bringing warmth each year to one of the running community’s favorite locales.