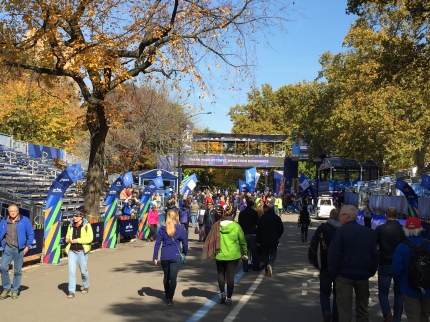 New York City. The Crossroads of the World. I never really wanted to run a marathon, but I am a sucker for the energy that surrounds a race. I was in NYC for a work conference the day after the 2014 NYC Marathon and getting a taste of the post-race energy, I knew she had do to it. NYC is one of Karen’s favorite places to visit, so she was willing to give it a shot too! So a few years ago, we decided to throw our names into the lottery, figuring the chance of getting in was slim. Go figure, we BOTH got in! To be able to go with a friend is a great way to experience an iconic marathon.

Training in the summer was brutal, but we trudged through. I was a novice marathon runner, and followed a training plan found online. I would run 3-4 days per week and probably averaged 30 miles each week. I had recently found Happy Runners and was doing speed work, but was really under-prepared. I also felt I had NO CLUE how to fuel or pace properly. However to me, none of this mattered, we were running in the New York City Marathon!! For Karen, her racing issues were also being a beginner marathoner, and not running enough miles during training.  She had a lot of nausea problems, which now in hindsight, she felt was partially due to improper hydration. We managed through the training and boarded a plane to NYC on that famous first weekend in November 2015. 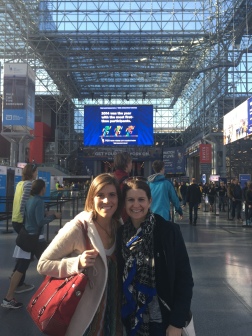 Everything about the race was amazing.  We spent far too much time and money at the expo before walking from the expo to central park. Here are our rookie lessons learned when it comes to running the NYC Marathon:
Lesson #1: don’t spend so much time on your feet the day before the marathon! Tough to do in NYC!
Lesson #2: Don’t sprint across the Verrazano even if you hate heights and specifically hate that bridge. You’ll pay for it later.
Lesson #3: Slow down. Worth repeating: don’t go out too fast in a marathon!

Lesson #4: There is a mountain in the middle of NYC 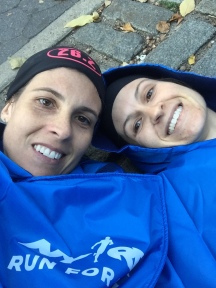 and it won’t show up on an elevation bridge, but it’s called the 59th Street Bridge.
Lesson #5: Stay on top of your fuel and hydration. We struggled with this. I had leg cramps starting in the Bronx. Karen finished the race with the worst nausea and vomiting she had ever experienced. Let’s just say she doesn’t look at the Central Park Wall quite the same way.
Lesson #6: Smile and enjoy the day. It’s not every day that you get to run through roaring crowds cheering your name in NYC. 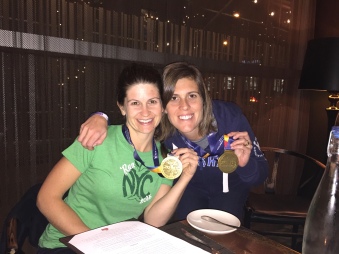 Lesson #7: Make celebratory dinner reservations at a fancy restaurant and then be sure to go. We almost didn’t, but I got Karen some ginger ale to help her post-race stomach issues, and she could finally think about food! Once we ate some salty food, we felt like a million bucks (well, maybe not that much).

The New York City Marathon will be held this year on November 4, 2018. Karen is hosting Kimberly and I for brunch at her house to celebrate Kimberly’s City Of Oaks 10K finish, and to watch our favorite professionals run this race. We will also be looking for our friend Pauline, who is representing Italy in the opening ceremonies! 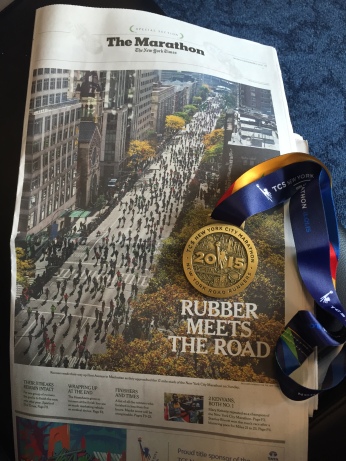